Some events trigger memories revealing what a really long strange trip this has been. Beliefs that I once held to steadfastly have fallen away like the leaves of Autumn and are no longer held by the branches of my mind.

Recently I hosted a screening of the film, “Walk With Me” about renowned Zen meditation master Thich Nhat Hanh.  Thay (teacher), as he is called by his students, is the Vietnamese monk who was at the center of “the third force” during the Vietnam War, a non-violent Buddhist movement for peace. He founded the Order of Inter-Being and  developed what is known as “socially engaged Buddhism.” I have the deepest respect for him and appreciate how many lives he has helped awaken to the teachings of the dharma (the wisdom teachings of Buddha), and how to apply these teachings to one’s personal life and the social change movements for a better world. I am indebted to him for his ongoing stream of shared insights and his transmission of the great peace that is at the heart of what we all seek, the true nature of being.

But my first encounter with Thay in 1966 was not an experience of respect, peace or even civility. At that time, I was a student at the University of Florida and spent much of my time traveling throughout the state visiting with groups on and off college campuses. I was involved with organizing farmworkers, people living in poverty, support for civil rights and the growing Black Power movement, and for student rights on campus. But the most primary focus of my attention was resistance to the Vietnam war and the draft.

Vietnam occupied my mind daily and I was actively engaged in debating the issues in front of the University library, passing out leaflets, and organizing peace demonstrations. My views, along with much of the student new left, were that the U.S. was fighting an imperialist war of aggression against the people of Vietnam who were seeking to be liberated from foreign control; the only solution was immediate withdrawal of U.S. troops. I was 22 years old, and I tended to think that what I believed was the truth.

So when I learned that the University was going to host a speaker from Vietnam, a Buddhist monk involved in an alternative peace initiative, I planned to attend. I knew nothing about Buddhism, but was suspicious of all religions. I also was skeptical of any “alternative” to the idea that U.S. troops needed to withdraw immediately. At his talk, I felt annoyed that there was a very large audience, much larger than anything our anti-war movement could ever bring out. I didn’t really listen to what he said, but was focused in my mind, preparing to challenge his views with my more radical (true) position.

After his talk, a group of students gathered around him in the lobby asking questions. I moved into the crowd, took a breath and spoke critically, confronting him on why he wasn’t condemning the U.S. more, why he wasn’t joining the liberation forces in Vietnam fighting against the invading U.S. military. That was it, my first encounter with Thich Nhat Hanh. I don’t know what he said in response. I wasn’t listening. I walked away feeling a mix of pride and uneasiness. I didn’t even bother to learn his strange name.

A number of years later, I had embarked on a spiritual quest myself and started questioning everything I thought was “real” about myself and the way I saw the world. At some point in the 1980s I became aware of the Vietnamese teacher, Thich Nhat Hanh, and his work with engaged Buddhism. I learned that during the war he had been under attack by the South Vietnamamese government (U.S. allies). Yet, after the victory of the National Liberation Front (Vietcong) he was forced to leave his homeland. The “liberation” forces were too threatened by his teachings of non-violence and compassion and instituted repressive measures against the Buddhist schools and monasteries. 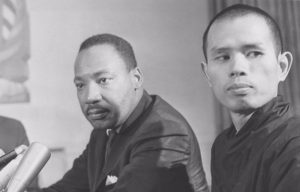 The more I learned from his writings and talks about engaged Buddhism the more resonance I felt. Though I was not a member of a Buddhist lineage, I was open to the basic teachings. I was also developing my own sense that any true spiritual practice ought not separate us from the struggles for peace and justice, but rather guide us to be involved in ways that are authentic and effective. Though I had great admiration for Thich Nhat Hanh, I still didn’t remember our first encounter. The truth is, I can’t remember when I made the connection. I do remember that it was a jaw dropping kind of moment. I got in Thich Nhat Hanh’s face and dissed him? WTF!

Part of me wanted to rationalize or minimize the event. I told myself that “the person I was in 1966 was not who I am now.” That person even went by a different name, “Nik,” (my nom de guerre of my radical days). Yet, I felt weird, embarrassed. I knew quite well that while the sense of “I” can change, even radically transform, the I that I am now still has to take responsibility for my past deeds. This man had sacrificed so much while witnessing the devastation of his people and terrible violence by both sides. He came to this country on a mission hoping to appeal to the people of the U.S. to stop their military campaign and instead provide genuine assistance to the people. I, the I that I was then, treated him disrespectfully, rudely and arrogantly. Though I doubt I harmed him in any lasting way, I feel that for my own peace of mind I need to apologize. I’m sorry, Thich Nhat Hanh.

Perhaps, in making amends, I can also share a lesson for others. We are all too easily captivated by beliefs, especially when they give us a sense of identity and tribal connection with strong emotional bonds. Out beliefs, after all, are only thoughts, bubbles of mental energy. When we identify who we are with our thoughts, we tend to have separative feelings towards those with different beliefs. Watching or listening to the news today, I feel the waves of anger, fear, blame, and the win/lose judgements of zero-sum thinking. I choose to withdraw power from the part of me that reacts in that way. I choose to open my heart/mind to the teachings that come from all spiritual traditions, spoken thusly by Guatama Buddha, ““Hatred does not cease by hatred, but only by love; this is the eternal rule.” Crossing the boundary from ideological fixation to love is a great liberation. This is the teaching of the Venerable Thich Nhat Hanh, to whom I deeply bow. 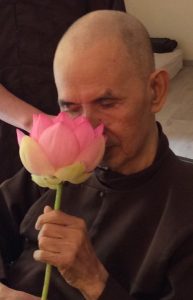 After first remembering my encounter of 1966, I went to the library and internet and searched around for articles about Thich Nhat Hanh and his visits to this country. I think I partly hoped It was a “false memory.” I found out that in 1966, Thich Nhat Hanh did indeed come to the U.S. on a speaking tour promoting his message of peace through non-violence and negotiations. He spent time with Thomas Merton and also Dr. Martin Luther King. He urged Dr. King to speak out against the war, and shortly afterwards, Dr. King gave his famous Riverside Church address publicly making the case against the war. (You can hear it here https://www.youtube.com/watch?v=OC1Ru2p8OfU; one of his greatest and most historic speeches.)

On his ’66 visit to the U.S., Thay attended conferences and peace rallies and spoke at a number of universities. Though my specific experience at the UF in Gainesville was not mentioned, I found at least two references with accounts like this:

“At a huge anti-war rally in 1966 a young man suddenly yelled, ‘Why are you here? You should be in Vietnam fighting the American imperialists!’ In other words, Nhat Hanh said, the man wanted him to fight, to kill Americans. He answered, ‘Well, I thought the root of the war was here—in Washington—and that’s why I have come.’”*

“During this tour when an angry young American stood up at a meeting and told him that he should be at home where the war was, he responded that he was speaking in the U.S. because the roots of the war were there, and it was these roots that needed attention.**

From the context of those quotations I am pretty sure they weren’t referring to my experience in Gainesville, Florida. Likely, these were my comrades of the time, like-minded angry young “radicals” certain their thoughts were true.

Since that time, Thich Nhat Hanh has travelled the world helping to bring awareness of the roots of violence and injustice, beyond Vietnam. He has devoted his life to helping each of us confront the inner tendency that comes from greed, hatred or ignorance and to instead choose to cultivate compassion. I smile in recognition of his forgiveness of all transgressions.

You can see more about his work and learn how to support it here: http://thichnhathanhfoundation.org/blog/2017/11/6/anger-work-is-peace-work

*”The Buddhists Had the Answer to the American War in Vietnam” by Larry Calloway http://larrycalloway.com/hanoi/