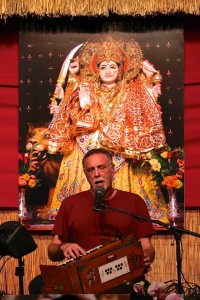 I was gazing at all of the beauty in the world. Can you imagine all of the beauty in the world condensed and shining brilliantly in one person? When we fall in love with someone, that’s what we’re seeing: all of the love in our own being is projected onto the screen of the loved one. Maharaj-ji merged with Infinite Love, so when his other devotees and I looked at him, we were looking directly into the light coming from the projector, rather than what was being shown on the screen. Then there was the feeling of being at home, so totally at home. My heart was at ease with itself.

From Chants of a Lifetime by Krishna Das

What is your religion?

Would you say that you are on a spiritual path that doesn’t have a name?

I don’t know if it has a name. My guru was Hindu, but he never made us Hindus. We never were initiated in anything. He himself said to us, “Sub Ik” (it’s all one), all paths lead to the same goal, all One. So at that point, I stopped thinking about it. That was 40 years ago. To try to get me to think about it now is going to be interesting.

But really, my experience with him is what my whole life revolves around. In him I found everything that I wanted, that I want and could ever want. He was the embodiment of the whole universe. In that presence, which is not attached to his physical body, was the essence of everything I longed for. I had no questions after that. I had no doubts about what this is about, where I’m going, My only doubt is if I can get there myself, if I have the strength to walk on the path.

On being a Jew:

If there was a chance of me joining any particular religion, it would have been Hinduism. But my Guru himself never made us do anything or intimated that it would be better if we were initiated as Hindus. He loved us as we are as human beings, and that kind of love I didn’t find anywhere else until that time.  That kind of love is God’s love and that was the love I was looking for and it was that love I found in my Guru. That opened me to all the other traditions, to finding it everywhere. I find it in Judaism and I find it in Buddhism. But I don’t’ see myself as one or the other. I’ve been initiated in Tibetan Buddhism because there are some practices in which you get initiated. I took refuge, but I still don’t consider myself Buddhist.

Within your framework, what could possibly be the karma involved in you coming into the Jewish tribal community?

I was supposed to be “the first Jewish point guard to play pro-basketball” and I blew it!  That was it. They transferred it over to, “the first Jewish Kirtan Wallah.” I don’t have to run around so much. (laughter)

Karma is something they say no one understands, nobody! It’s such a complex web. You have to deal with it by just dealing with what is and never really knowing why. Some of the great saints can see a lot of it, but they say that nobody can grasp the whole thing.

Krishna Das is a kirtan wallah (chant master). Layering traditional kirtan with instantly accessible melodies and modern instrumentation, Krishna Das has been called yoga’s “rock star.” Known to friends, family, and fans as simply KD – he has taken the call-and-response chanting out of yoga centers and into concert halls, becoming a worldwide icon and the best-selling western chant artist of all time. His album ‘Live Ananda’ (released January 2012) was nominated for a Grammy in the Best New Age album category.

KD spent the late ’60’s traveling across the country as a student of Ram Dass, and in August 1970, he finally made the journey to India, which led him to Ram Dass’ own beloved guru, Neem Karoli Baba, known to most as Maharaj-ji.

Given the name Krishna Das, KD began to chant as part of following the path of Bhakti yoga – the yoga of devotion.

Krishna Das is a modern day troubadour, traveling and chanting all over the world seemingly without stop.

Books: Chants of a Lifetime, The Divine Reality