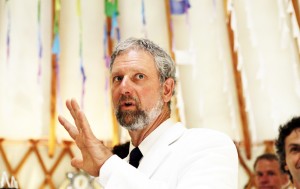 I’m a Jewish kid from Detroit who somehow ended up in the middle of the jungle, in this esoteric, gnostic, Christian, shamanic spiritual path.

(On being introduced to the Santo Daime):

The first ritual I attended was an all-night dancing and singing session with 200 people on a mountaintop in a remote valley in Brazil. Along with how strong the Daime was, how confronting the inner experience was for me of my most hidden pain and light, I found myself in a strong altered state in the presence of this big cross in the middle of the alter table. I started to have thoughts about the pogroms my Russian ancestors had gone through, and it was like “Holy shit! Here I am in this totally bizarre place and they’re going to kill me.” I had this feeling that I wasn’t safe there. It wasn’t intuitive, because it was in fact totally wrong, but it was a strong feeling. I was experiencing what Rabbi Zalman Schachter calls Jewish PTSD. And it’s deep, for good reason. I kept asking myself, “What am I doing here?” The combination of PTSD and Daime made me want to run away. Fortunately for my future self, I was on this remote mountaintop two hours walk in the dark from even a bus stop. (Not that I could have told the driver where I wanted to go.) After a while, I managed to center myself and then I saw that the cross on the table was sitting on a base of a six pointed star. I looked at the star and said to myself, “The star I can deal with. I’m going to ignore the cross so I don’t run out of here screaming.” I was already deep into what we call the power of the Daime. It was super strong.

I understand now what took place then. When we make a true prayer, and when we are then linked to true Light, that prayer becomes the guiding energetic, the guiding paradigm within which our subsequent healing process takes place. It can take years for the prayer to work out. In that moment when I was looking at that cross, inside me there was a prayer, not yet conscious, but nevertheless deep in my heart, that I needed to resolve this conflict inside me between the cross and the star because I didn’t want to live in fear any more. That prayer extended to not wanting to live in fear about anything, but in that moment the metaphor of the Christian/Jewish conflict was the focus. I looked at that cross sitting on a Mogen Dovid and I made a prayer to Whoever was listening to come bring peace inside me.

So what does it mean that you are Jewish now?

It means that Judaism is in my blood. The way I walk through the world and the way I see things has a Jewish characteristic to it, including the wounds. My sense of humor is definitely Jewish as well as my bluntness and my bullshit meter. I don’t deny any of it. I’m not an active Jew in the sense of my practice. I’m a Daimista and I have a meditation practice. But I feel that I’m Jewish in the way that in this life I’m a man. I’m Jewish in the way that I have memory, that Judaism is part of the heritage I am living….

How would you describe what you inherited from the Jewish lineage, what you continue to value and also what you needed to let go of?

It’s very important to me, this thing about not bowing your head except to God. I carry it over even in the Daime which is very hierarchical. I still respect people based on what they show me, based on what the Divine tells me much more than any title or assumption. On the other hand, I have learned to respect my elders (one of which I have quite surprisingly become). I give people a certain amount of respect because of their position, but I don’t accord honor except as it is warranted. I’m not a very good follower except of what I know to be true. This is something precious about Judaism. It’s gotten me into trouble in the Daime, just like it did before I joined. It’s something that’s very important to me. I cherish the link, the ancient link to the line of Judaism, to know my origin, my path on Earth…..

Jonathan Goldman began his career as a practitioner of acupuncture in 1976. He went to Brazil in 1987, where he encountered his own healing, his teachers, and his mediumistic spiritual healership.
He is the leader of the Church of the Holy Light of the Queen, in Ashland, Oregon (Santo Daime). Santo Daime is a syncretic faith taking elements from Catholicism as well as African and Indigenous Brazilian shamanic traditions. It uses a sacrament called Santo Daime (literally, “Holy Give Me”) as part of its rituals. The sacrament contains Ayahuasca, a powerful shamanic medicine.
He lives in Ashland, Oregon, and maintains a practice in Transformational Energy Healing. He leads self-transformational retreats and healership trainings in Canada, the US and Brazil.

website: http://essentiallight.org/jonathan-goldman/
video about Church of Santo Daime featuring Jonathan Goldman: http://vimeo.com/6821805
Text of the preface by Jonathan for the book Forest of Visions by Alex Polari (one of the Brazilian leaders of the Santo Daime). http://www.nossairmandade.com/forest.php