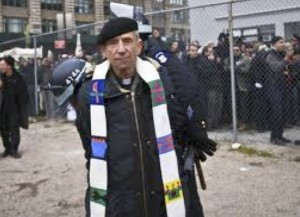 A 6 year-old Jewish boy living in Frankfurt, Germany in the late 1930s is immersed in the fears of the Jewish community under the Nazis. He’s had terrifying experiences of anti-Semitism, including being chased by Hitler Youth. As he passes a church, he spits on the ground. He doesn’t know why exactly he hates this church, but he senses intuitively that this edifice of Christianity is somehow connected with the agony of his family and community. Within ten years, this boy, whose family has escaped to the U.S. and now lives in New York, chooses to be baptized as a Catholic. The church of his baptism, a half-mile from the synagogue of his Bar Mitzvah, is where he celebrates his first mass as a priest.

What happened? How did a good Jewish boy with your background become a Catholic priest?

I joined the enemy. (laughter)

Did you have religious experiences early on?

Even from my childhood, I had a religious inclination. I used to have this idea that I would go at night to the synagogue we attended and get into the Ark of the Covenant. I felt that there would be sort of staircase there leading to the throne of God. I had that childhood idea. That synagogue was burned down by the Nazis.

Can you share more details about your conversion to Catholicism?

Basically, it was a kind of combination of adolescent schizophrenia and the descent of the Holy Spirit. I was going through a rather tumultuous adolescence, very insecure about my life, lots of inner turmoil, embarrassed by my parents, etc. I guess not that unique. Somehow, I became friends with some of the Irish kids on the street and began to run with their gang. They were tough working class kids and I got to know them. I appreciated that many of the Catholics seemed devout, though I was quite aware of how they often didn’t act that way in their lives.

One of them who was aware of my interest in religion invited me to meet his priest. I had never met one, and I said yes. I feel that higher powers were at work, using this imperfect human being to bring about something on a higher level. All of my dysfunction was used by the Holy Spirit to lead me to a higher understanding of religious reality. The priest was very open-minded and progressive, sympathetic to the Catholic Worker community. He wasn’t trying to proselytize. He loved that I was Jewish. I always say that he was one of the few priests in the archdiocese of New York who wasn’t anti-Semitic. Anyway, we began to meet fairly regularly and talk about all kinds of things.

How did your meetings with a priest play with your family?

They were in total shock. It became a state of constant shock. They sent me to a psychiatrist. He happened to be a Holocaust survivor and a very unusual man, very beautiful and wise. After seeing him for a year, he told my parents, “If Paul wants to become a Catholic, you should let him become a Catholic.” He refused to see it as a psychotic disorder. So, at age 16, I was baptized at a church about a half mile from my Bar Mitzvah shul. Of course, my parents were very upset.

Do you believe there is some kind of Soul or Spiritual Being that is specifically related to the Jewish people?

Undoubtedly. I’ve done a lot of work with Native Americans. I’m a multi-religious person, I practice Buddhist meditation, yoga, etc. The indigenous path is very close to me. I’ll very soon go visit a medicine man who is very close to me, a Dine. But I think I could put it in a more dry way; what I’m referring to is the Jewish value system. It’s the value system that is being distorted.

But I do believe that we have spirit guides that are connected to the Jewish history, and of course we have these accounts of angelic beings. Whatever that spiritual connection is, which I do not fully understand, that mission, that Jewish psyche, that history – it is being largely compromised today, and I feel that the American Jewish community is in a tragic moment.

Have you left behind being Jewish?

In the early stages of my becoming a Catholic, I think there was a part of me that just did not want to be part of a persecuted minority. I wanted to be accepted, and that has been one of the driving forces in my life, even though I’ve done so much that has caused me to not be accepted. So there was probably a sense of not wanting to be Jewish. But as I later evolved through my reading of scripture and with my contemplative life and prayer, I came to esteem and value my Jewish roots.

I do not feel I’ve left my Jewish identity behind me. I still feel very much a Jew. I’ve come to understand more and more clearly that Christianity is really a Jewish sect, and if there hadn’t been anti-Semitism in the early church, Christians today would still have Jewish identity. Jesus never rejected Jewish identity or practice. I do believe that the Gospel teaching at its core is Jewish. You know Jesus and Paul were rabbinic figures.

Father Paul Mayer (1931-2013) was a Catholic Priest and peace activist. He is remembered as a leading radical pacifist of the 1960s and early 1970s, taking part in acts of civil disobedience in an effort to speed an end to the Vietnam War.

Father Paul was deeply affected by liberation theology in the Catholic church, with its emphasis upon aiding the poor by battling unjust economic, political, and social conditions.
On February 8, 1971, he was indicted as a co-conspirator along with radical priests Philip Berrigan, Daniel Berrigan, and 10 others in an alleged plot to bomb the U.S. Capitol and kidnap Henry Kissinger, a top policy advisor to President Richard M. Nixon. Mayer acted as the head of the defense committee to support the defendants, who were known in the popular press of the day as the Harrisburg Seven. The defendants charged that the alleged plot was a fabrication constructed by the Federal Bureau of Investigation.
Blog entries at the Huffington Post: http://www.huffingtonpost.com/father-paul-mayer/
Tribute by Alan Levin for the Fellowship of Reconciliation:http://forusa.org/blogs/alan-levin/tribute-father-paul-mayer/12750
More on Father Mayer’s activities as civil rights advocate: http://occupycatholic.wordpress.com/2012/12/31/reverend-paul-mayer-is-a-lifelong-colleague-in-the-civil-rights-movement/