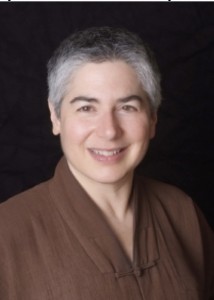 When I was 19, I was in a car accident and had a near death experience. Something happened that nothing had prepared me for. My mind opened up. When I recovered physically, I had to find out what that experience was, and who taught about it. It turned out to be a meditative spiritual awakening, and Zen masters and yogis taught about it.

You’ve said that yoga and meditation helped you to transmute some of the fear imprints of your family and you came to realize that you didn’t need to hold them anymore.

It is not that meditation and yoga get rid of the fear imprints. It’s not a matter of pushing them away. It’s about recognizing how my personality was formed with fear at the bottom, and developing a deep intention to develop a maturity that is even greater than the fear. We see this, for example, in mature Jewish humor, which acknowledges suffering and often plays with the idea of being a victim. This kind of humor acknowledges and transcends suffering. It is human, transcendent and helpful for everybody. In short, I didn’t want to live my whole life in a state of compensation for suffering, but rather to develop a personality that was big enough to hold it.
If you consider the difference between many of the Holocaust victims and, say, Victor Frankl, that was the maturation I wanted to build. I wanted to be like him. It wasn’t just about intellectual insight, but about developing a sense of my body, a way of speaking, and an emotional life—a mind and a heart big enough to include my whole life.
So then, what happens to the suffering?

I would say it becomes composted and allows people to bloom in a different way.

You see the essence of Judaism as “walking with God” and you still see yourself in that tradition?

I think so. Jews say, “God and self, Know God and know self.” Buddhism says, “No God, No Self.” If you say “God” or if you say “Self,” actual God and actual Self is not described or named by those words. If you say “no God” or “no Self,” actual no idea of God and no idea of Self is not named by those words either. I just have to learn to live with the ambiguity of the form of my life and not get too concerned about labeling myself one thing or another. That way lies madness, or maybe not madness but all sorts of problems.

Would you say that your way of practicing or experiencing and teaching Zen and yoga are influenced in some way by some aspect of your Jewishness? Is there some aspect of the transmission that you received as a Jew that is with you now?

Yes, certainly. There is the practical experience of suffering and also the emphasis on the personal relationship with the infinite. There is the idea of the sacredness of each everyday activity, the sacredness of nourishment and rest, the dedication to ethical principles as something to be lived. There are just so many things.

Shosan Victoria Austin began practicing both Zen and yoga in 1971. In the Soto Zen tradition, she is entrusted as a Dharma heir in the lineage of Shunryu Suzuki, an international priest of the Soto School, and a Dharma teacher at San Francisco Zen Center. She trained in the U.S., in India, and in Japan. In the Iyengar tradition, she is certified as an Intermediate teacher.