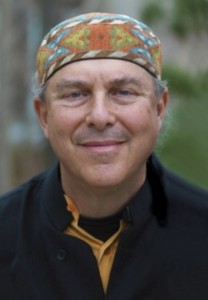 I didn’t turn my back on the Jewish religion. I didn’t see the need to turn my back on it at all. I wanted to learn as much as I could from wherever wisdom was. But I didn’t see any reason that a human being had to choose their spiritual practice based on their genetic bloodline. I think that is a curious notion in the world.

Your parents were Holocaust survivors. Would you say there was much trauma around that, fears that you had to deal with?

My parents were German Jews, but to paint them with the brush of “Holocaust survivors” would not really be accurate. My mother left in ’36 at age 24 to come to America. Her family enjoyed their life in her youth; they were well to do. They didn’t experience any extraordinary brutality to themselves. For my father it was a little different. There was some horrendous stuff, but he had an optimistic point of view. What he remembered was his getting out and how lucky he was, how lucky he was to meet my mother and have a really beautiful life. So that’s how he dwelled on it, “How lucky I am.”

As for me, I seem to have been born with an optimistic attitude. Also, I’m the second child, and I think my sister got more of the angst. Growing up in Queens, there were Jews all around; it wasn’t Alabama. We didn’t experience persecution. Later on, as I became eighteen, we were smoking pot, taking LSD and that put you in a different movie. You were part of a wholistic interdependent universe.

I was certainly very conscious of what happened and the extraordinarily horrific nature of it. It made me, like other Jews, naturally compassionate regarding human suffering that was based on foolishness of one kind or another. I went to the civil rights march on Washington. However, I was not inspired to be a radical or political activist. My calling was more music and harmony, working with people as a humanitarian.

When you began seeking, did you ever consider that your spiritual path could be Jewish?

I was only looking for the quickest method to awaken, the most profound and most deep. At that moment it looked like the yogic path. Ram Dass had come back. He’d been meditating, reciting sacred phrases in Sanskrit, practicing different aspects of yoga, and so I did that. That’s where I started.

Shabda Kahn has been a disciple of Sufism since 1969. He is a direct disciple of Murshid Samuel Lewis (Sufi Ahmed Murad Chisti) and worked closely with the great American Mystic Joe Miller. Shabda is currently the Pir (Spiritual Director) of the Sufi Ruhaniat International and the Director of the Chisti Sabri School of Music. He is also a disciple of the illustrious Tibetan Buddhist Master, the 12the Tai Situpa Rinpoche.
He spent 24 years (since 1972) developing as a vocalist under the living guidance of the late Pandit Pran Nath, the Master North Indian Classical Vocalist, who planted the 800 year old oral transmission of Chisti Sufi Vocal Music in the Western world.  Shabda has appeared in concerts ranging from Visions for a Perfect World at New York’s St John the Divine Cathedral, for His Holiness the Dalai Lama, New Music America in Chicago, at Delhi University Music School and Shivaratri Festival in New Delhi. He is one of a handful of Americans who have dedicated themselves to carrying on the legacy of the treasure of North Indian Classical Vocal Music.
His CDs and touring schedule are available on his website: http://www.marinsufis.com/