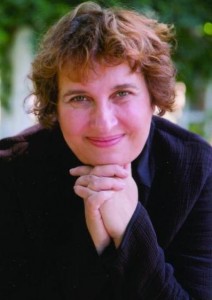 “In Bodhgaya, at my first meditation retreat, I was like a newborn calf in my bright faith, and the Buddha’s voice, full of love, promised to lead me home. The voice of the dharma was showing me how to get there, step by step. The voice of the sangha was reminding me that I wasn’t traveling alone.

If somebody asked me if I was Jewish, I’d say, “Yes,” because I wouldn’t know what else to say. It just doesn’t mean that much to me in terms of actual spiritual practice. You could ask me if I were a Buddhist, and I’d say, “Yes,” because that is the core of my spiritual life. But I don’t think of Buddhism as an identity, as a religious identity. It is more practices and methods. So that’s what I mean when I say it would depend on the context.

Someone could ask me if I’m Buddhist and I might say, “I don’t think like that.” If people were to ask me how much of my day-to-day spiritual life is rooted in Judaism, I’d say, “It’s really not.”

Other people would consider me Jewish, so there is that. One time I was returning from Nepal where I studied with a Tibetan teacher. At the airport in Bangkok, they pulled me back for extra security and one of the questions they asked me was, “Are you Jewish?” I answered, “Yes.” Then, a few minutes later, my bags were going through the security scanners and all the Buddhas I had bought in Nepal that were in my hand luggage showed up. The woman said, “Are you Buddhist?” and I said, “Yes” (laughs). That was me answering differently about my religious affiliation within minutes.

I know some people say, “I was born Jewish,” or “I’m Jewish on my parents side.”

Do you ever think that the part of your path involved in working for justice and peace could be attributed to your being Jewish?

Well, it could be. There’s that prophetic voice in Judaism which is so strong. Did I just get it from Buddhists? Hard to know. In Buddhism, even in early Buddhism, there is a lot about engagement. Monks were always building schools; that’s how kids got educated in Asia, through the monasteries. They also had dispensaries and were feeding people.

But there wasn’t a sense of monks or nuns suddenly engaging in political or systemic change. They would focus more on feeding people than in changing the system or redistribution of wealth. Maybe I did get that from the Jewish thread. It’s definitely in the air for me. I see the distinction very clearly between social work and social justice, feeding somebody and trying to change the way society is organized.

Sharon Salzberg is a meditation teacher and author. She is the cofounder of the Insight Meditation Society (IMS) in Barre, Massachusetts, and has played a crucial role in bringing Asian meditation practices to the West. The practices of mindfulness and lovingkindness are the foundations of her work.

Other books: Love Your Enemies, and Faith.